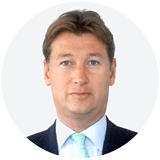 As Chairman of Energy, Alex provides a wealth of leadership knowledge and experience to Miller’s Energy business unit, playing a key role in its strategic growth and development. He is also an equity partner at Miller.

Alex started his career at Miller in 1991 with the broking of upstream energy business for various national oil companies and several of the oil majors. Later his geographical focus shifted to North America where he led the production effort to help establish Miller’s position in 2012 as the largest producer of Gulf of Mexico windstorm business to the London market.

After heading up Miller’s upstream energy team, Alex took on the responsibility of leading the energy division in 2015. In his current role as Chairman, Alex continues to manage key client and market relationships and is also involved in the development and acquisition of people.

Outside of work, Alex enjoys travelling, skiing and playing golf and tennis.