After more than a decade of soft-market conditions, which saw insurers’ profits tumble and reverse into a tide of red ink, a swathe of market withdrawals turned the trend on its head. Prices soared. Now, following the entrance of more than $500 million of new capacity – $200 million more than was withdrawn during the hard market phase – clients are experiencing a levelling off in pricing. Whilst the word reduction is still not being used, mounting competition between underwriters eager to feed their new lines can only be good news for buyers.

The soft market that emerged back in the mid noughties was fuelled by a decade of increasing overcapacity. The trend began to reverse in 2018, when a continuing series of large losses punished a market under-priced by compound rate reductions. In the US alone this included:

As a result of mounting losses, 13 London cargo insurers pulled out of the class, withdrawing total cargo capacity of more than $300 million (see the table below). Some went voluntarily; others were nudged by Lloyd’s ‘Decile 10’ syndicate review. The impact was significant. Rates rose dramatically, coverage was pared back, and some prominent underwriters lost jobs when whole cargo operations were shut down. 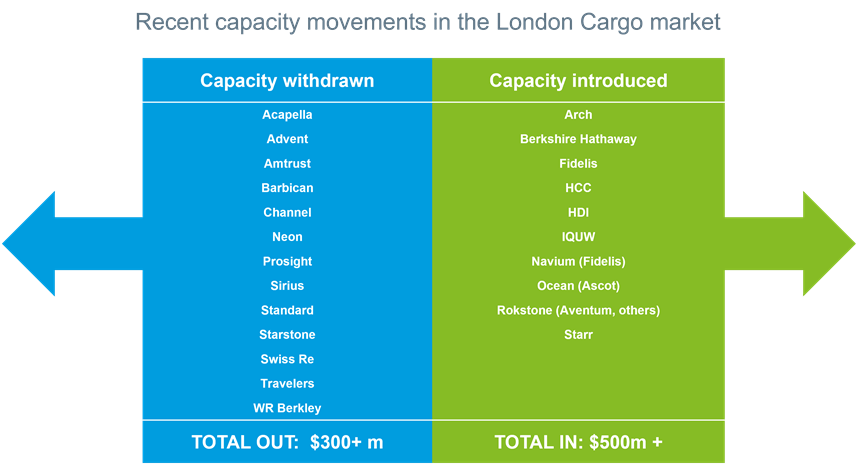 Good London brokers stepped up, leveraging their technical skills and shifting seamlessly to a hard market stance to best guide their clients through the volatile market conditions. Submissions became water-tight. However, even with the supreme efforts of the best brokers behind them, clients – including blue-chip buyers with clean loss records – had to pay more.

10 new cargo-market entrants, deploying around $500 million of fresh capital have subsequently changed the market dynamics. Underwriters, new and newly returned, are canvassing brokers for business as new markets move aggressively to fill the capacity void. However, despite the new competition that has arrived, buyers should not expect to see their insurance bill slashed. New entrants are holding their nerve, however will be eager to show their capabilities on a pricing level to scale for market share. Rises are still on the cards for many, but as the market achieves rate adequacy, increases are only in the low single-digit range.

The new market dynamic reflects an overall change in the way the cargo market operates. Capacity may have returned, but unmitigated appetite for risk is a thing of the past. The last 24/36 months have seen a revitalised underwriting discipline, which we anticipate will continue to underpin how London will operate. Underwriters have gone back to basics with an emphasis on rate adequacy for core cover. There is increased focus on policy wording, including catastrophe definitions and the introduction of aggregation language for tornadoes and wildfires. Pricing has become more technical, and risk management now cuts through underwriting decision-making. No one is ready to drag the market down, leading to a more selective class of underwriters, who have taken their medicine and are now acting out their resulting plans.

Amidst those changes noted above, relationships remain key. Buyers who stood steadfast alongside their London underwriters throughout the cycle will have realised tangible net benefits, and the increased appetite shows that there are deals to be done. London remains the global centre of excellence for marine cargo and stock throughput business and we’re here to help. 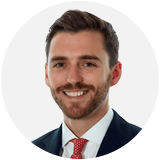