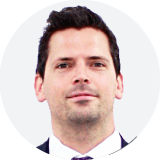 Matthew is responsible for the day to day management, renewal and placing of mid to large sized corporate retail accounts as well as developing new business revenue.

He has extensive experience in the retail sector, from manufacturing, hospitality, financial services through to media. His key focus is with UK domiciled companies, however this can include overseas operations in the EU and further afield.

Matthew began his career in engineering back in 2006, before moving to a large global broker which later resulted in a transfer to their real estate team in London. In August 2015 he took up the opportunity to move back into retail with Miller and has since taken up a role of Account Manager/Exec.

Matthew holds a degree in Business Studies from the University of Sheffield Hallam and is also ACII accredited.

In his spare time, Matthew enjoys running, playing tennis and golf.  But his real passion is supporting his team, Sheffield Wednesday.